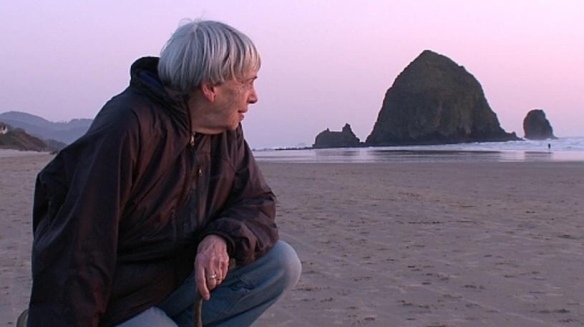 Life rises out of death, death rises out of life; in being opposite they yearn to each other, they give birth to each other and are forever reborn. And with them all is reborn, the flower of the apple tree, the light of the stars. In life is death. In death is rebirth. What then is life without death? Life unchanging, everlasting, eternal? –What is it but death—death without rebirth?

There is a lot one could write about Ursula K. Le Guin. She was a trailblazer in so many aspects of her life. She was a woman science fiction and fantasy author in the sixties when the genres were dominated by male voices. She was a feminist, an activist, a philosopher. She wrote deep thoughtful books in ways that were both accessible and engaging. You could spend pages diving into any one of her novels or causes and only scratch the surface on her impact on literature and culture more broadly. But, today I want to talk about what Ms. Le Guin meant to me, because even though I never met her, she is one of the few authors I feel a personal connection with.

Deep relationships are formed over many years. The first time I read about Frodo and Sam, a boy of ten sitting with my father’s red leather-bound copy of The Lord of the Rings splayed enormously in my lap, they were just characters in a story. By the time I was fifteen, I read the stories, not to see how they ended, but to spend time with old friends. Every time I got to the end and Sam said, “Well, I’m back,” I knew that was just his way of saying good-bye.

Some books take longer for me to connect to, and some

will always remain remote. I could read Elric’s saga a thousand times and never find peace with his strange otherness. This separation between reader and subject is not uncommon. In most fantasy, strange creatures abide in strange worlds: orcs and elves and dwarves live in places where dragons fly and vast armies battle and mountains of doom smoke ominously. The Earthsea Trilogy is different. Great deeds are hinted at, but the real focus of the books is on the same struggles that regular people have to deal with every day: paying for your mistakes, discovering your place in the world and learning that it may shift underneath you at any moment, facing your own mortality.

I picked up my brother’s copy of A Wizard of Earthsea when I was eleven. It was a tumultuous time for me. My parents had just separated. After spending my elementary years in public school and attending church only on Christmas and Easter, I found myself enrolled in a Catholic private school where church and belief were mandatory. I was struggling in ways that were disorienting. Never having been in the principal’s office, I spent my first several months of school in constant trouble. It was nothing that legions of middle school kids haven’t faced before, but it was all new to me and seemed insurmountable. This was my life when I met Ged. I identified with him immediately. His joy in magic. His restlessness. His feelings of inadequacy. His need to prove himself. This was not some ancient wise man I could never aspire to be, like a Gandalf, but a young man who went to school and made mistakes and got in trouble. He was me, and he lived in a world and faced problems I could identify with.

If stories about young wizards going to school sounds familiar—cough, Harry Potter, cough—you can thank Ged, or more appropriately, Le Guin. Before she burst on scene with A Wizard of Earthsea, mages were almost universally old white men with beards and heroes were larger than life. Her works opened the door to fantasy heroes of any gender, any age, any color, and just as flawed, and weak, and, yes, mortal as we are. In fact, mortality is a theme that is woven through many of Le Guin’s books. We are introduced to that shadowed world and its low stone wall early in A Wizard of Earthsea, and we learn quickly that there are places even mages cannot go. In The Tombs of Atuan she tells us that there are beings that cannot die, but neither can they live. This idea, that death is necessary to the existence of life, is the theme at the heart of the last book in the Earthsea Trilogy: The Farthest Shore. It was a hard lesson to learn when I was young and very much frightened by the idea that our time on this Earth was limited, and I imagine it is a truth that will be harder to accept as I grow older and that end comes nearer. There is a Paul Simon verse from his song The Leaves That Are Green that runs around my head every time someone I feel a connection to dies:

That’s all there is.

And the leaves that are green turned to brown,

And they wither with the wind,

And they crumble in your hand.

In its brutal succinctness, it may be one of the most 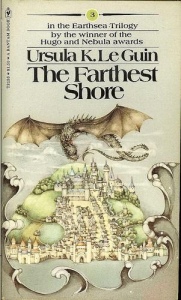 despairing bits of poetry ever written. We are born, we connect ourselves to other people, and then they are taken away from us one by one. We lost Richard Adams in 2016, and I couldn’t help but be sad for Hazel and Pipkin, and all the rabbits of Watership Down. This summer, while I was in London, Michael Bond passed, and it seemed inconceivable that Paddington Bear’s creator was no longer with us. Now, I must say good-bye to Ms. Le Guin, the author that created one of my oldest and best friends. It would be easy to despair. Yet, in one of those strange coincidences that makes you wonder if serendipity and fate are not long-lost siblings, I have been reading the Earthsea Triology with my eleven-year-old for the past couple of months. We were about half-way through The Farthest Shore when we heard the news about Le Guin’s passing. That night we read the following passage:

I, who am old, who have done what I must do, who stand in the daylight facing my own death, the end of all possibility, I know that there is only one power that is real and worth the having. And that is the power, not to take, but to accept.

There is no way I could have said it better. Rest in peace, Ms. Le Guin. You will be missed. Now, I need to go and spend time with my old friend Ged. I understand that he and Tenar have some unfinished business to attend to on Gont. Some advice old friend, I think she’s a keeper! 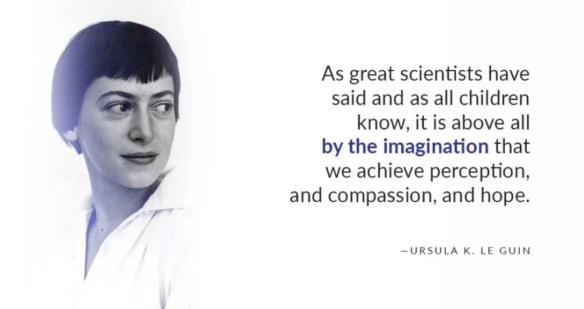